[HELP FOR POOR AND BRILLIANT STUDENT OF MUSIC]

1.      Name of the Society shall be:  SODEPUR SREEJONI WELFARE SOCIETIES.

a.      To acquire, establish, start, and run, maintain or manage primary schools, musical institution, libraries and publication of periodical magazine and books for the benefit of the people.

d.     To generate awareness and take initiatives on reproductive Child Health, Mother and Child Care, AIDS, General Health and Hygiene, Public Health among the poor people of all communities.

e.     To arrange and organize lectures, debates, discussion, seminar for awareness of the “Protect of Lost Music.”

f.      To undertake and conduct music education, training in different therapy (Mind Cultivation and Health) for needy people of the Society.

h.     To organize an ambulance for the rendering service to the needy patients and to organize blood donation camp from time to time.

i.      To cultivate the spirit of culture among the people by organizing various cultural programs/functions from time to time.

j.      To make the unemployed self dependent through telefilm and serial for the welfare society.

l.      To take over the management supervision and control of the part of the music institution being managed by the society.

m.   To provide home, education and health facility to destitute needy, less privileged and orphan children without discrimination of race, nationality, caste or creed and to arrange short stay home. 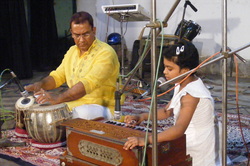 In 1981, he passed from Sodepur High School.   He passed from Bhoirab ganguly college, commerce in 1985.    His father is Late Mr. Sachindra nath dewanjee and his mother is Late Ms. Pronoti Dewanjee.  For music performance , he travelled Shilchor, Guwahati, Orissa.  He worked at India Foils as Accounts Supervisor.  Total music experience is 37 years.

He also trained many students in these instruments.  He has composed many Ragpradhan and Bengali Modern songs.  He composed on Raga named “Nirjhor” and also one beat (taal ) “Payel  Chondo”.  He is creating new beats with his music recording software FL6.  He is now teaching students this recording software and giving them practical work experience in music composing through this software.  He recorded one music cassette on Bengali Modern songs “Rama “ from Bhavna records.  He has opened his own music recording facility and is offering musicians music recording at a low rate through his NGO , Sreejony Welfare Society.   His school name is Kakali Bitan Sangeet Bidyalay and many students are taking lessons from him on Classical Vocal and Bengali Modern songs, Geet, Bhajan, Najrulgeeti, etc.  He has written a book on music titled “How to Compose Your Own Music.”

Invited by  Nikhil Banga Prathamik Shikkhak Samiti (Barackpore subdivision), on 06.08. 2005, on Sunday 10 am as a JUDGE on cultural program’s competition and it’s a program of “Ganasangeet.”


Invited by Goodwill Welfare Association (NGO at Uttarpara, Hoogly, 19th January Sunday, 1 pm, Judge of Najrulgeeti in a competition at this organization.

Invited by The Municipal Commissioners of Panihati as Judge of Folk Songs competition on 17th, 18th, and 19th December 1999 on the Birth Anniversary of Kaji Nazrul Islam (12 noon) at Lokosanskriti Bhavan.

Recently the 14th annual function of Kakali Bitan Sangeet Bidyalay at Lokosanskriti Bhavan of Sodepur.  The inaugural song was presented by Mr. Deborshi Chakraborty.  Rabindrasageet was performed by Ms. Mr. Anurupa Kar, Mr. Parthasarathi Bhaumik, Ms. Mausumi Bhattacharya.  Nazrulgeeti was performed by Ms. Susmita Ganachaudhury, Ms. Sudipta Ganachaudhury, Ms. Ellora Bandyopadhyay.  Modern songs were presented by Ms. Dipankar Sharma and Ms. Anusuya Guhathakurata.  The notable attraction is the musical performance of Mr. Trinesh Dewanjee (Neelkantha) in lyrics and music. Inspite of a good arrangement by the organizers, the poor attendance of the audience proved that  the popularity of the Rabindra- Najrul evening is dyeing out.

Mr. Dewanjee was the judge in Flute at Chatra Juba Utsav in a state level competition in flute.  The event took place from 12th to 15th December, 1994. This West Bengal Chatra Yuba Utsav 1994 took place at Jorasanko on 13th December at 12 noon.  The organization Rajya Yuba Kendra is at Moulali, Kolkata -14.

Nabin Pratibha organized a cultural program where Mr. Trinesh Dewanjee was invited as a guest in the program at Arabinda Pally, Natagarh, Sodepur in January  31, 2001.

Panihati Chenamukh Club located at Ramkrishna Ashram Road, P.O. Panihati in North 24 pargana Invited Mr. Trinesh Dewanjee  in a cultural competition on Nazrul geeti, recitation and Rabindra Sangeet and drawing on 16, 17 and 24 November 1996.  He was made the Judge of Nazrul Geeti  to be held at 3 pm by Mr. Sudip Roy, Cultural Secretary of Panihati Chenamukh Club.

Mr. Trinesh Dewanjee participated in the Panihati Pouro Chatra Yuva Utsab on 17th and 18th December 1998 for a World Free from Wars.  He was made the Judge in the competition on Folk Songs by Mr. Monoranjan Sarkar, Chairman of Chatra Yuva Utsab Samiti and Councillor of Panihati Municipality.

The main formula for life is love:  Manna Dey

Dipanjan Ghosh:  At Sukanta Sadan in Barackpore, a felicitation program was organized along with a musical program.  In this cultural evening, Mr. Mohanlal Mitra,  Mr. Manna Dey, Mr. Ashish Chakraborty, Mr. Sukhbilash Sharma, Mr. Narayan Chandra Ghosh, Mr. Bhagirath Maitra, and Mr. Arjun Prasun Bandyopadhyay.  At the end of the felicitation program, musical performance was given by Ms. Rinku Biswas, Nilkantha (Mr. Trinesh Dewanjee ) and the students of Kakali Bitan.    But the main attraction was the performance of Mr. Manna Dey.  Mr. Manna Dey is tired due to his old age but he is the best as he has won the hearts of the audience.  His songs like ‘Jadi Himalay Aaj Jadi’, ‘Aj Abar Sei Pathey,’ ‘Monay Porey Sei Din,’ ‘Sundari Go’, ‘E toh Rag Noi’, ‘Ei Kuley Aami,’ ‘Dur Hai Kinara’, etc. have won the hearts of the audience.  He told the reporter of Sambad Akhon some of his favorite ideas.

Manna Dey is a bright example of the musical world.  He is not only successful as a musician but he is also a great personality.  On May of this year, he has reached 80 years of age.

Q:  How do you accept the love of the audience in this way? Do you feel irritated?

Manna Dey:  Why will I get irritated, love is the main thing.  It is through love by which we can conquer everything.

Q:  How do you feel performing in the age of the cable channels?

Manna Dey:  I do not find any difficulty.  Good listeners want to get something  and likes good songs.  As long as I am physically fit, I will continue singing.  Music is my life.

We took this interview taking permission from the organizers and tried to present a small portion of it and in the future, we will publish a detailed interview. 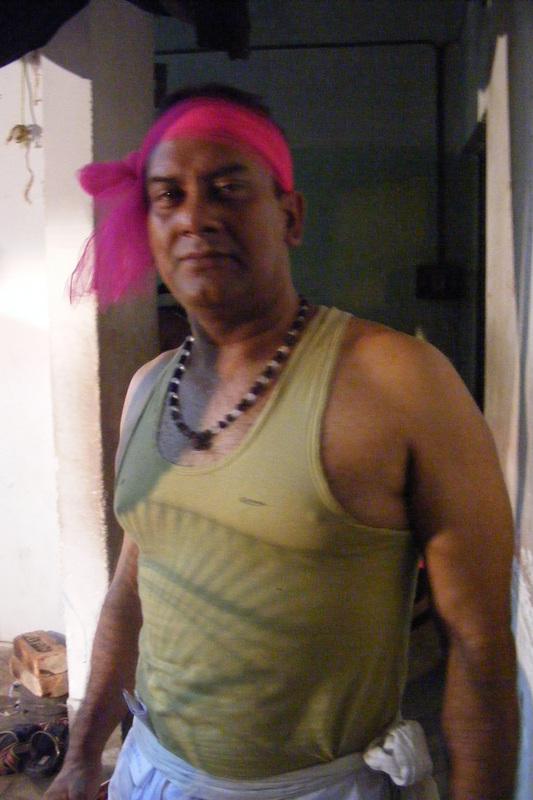 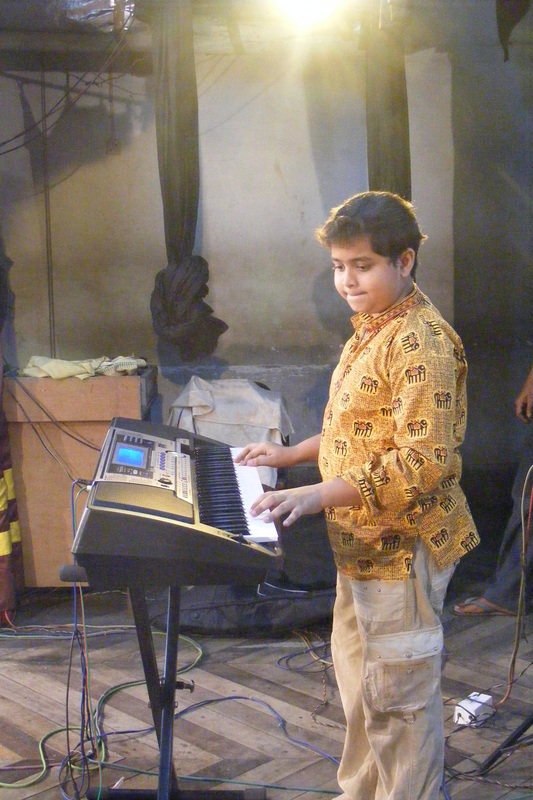 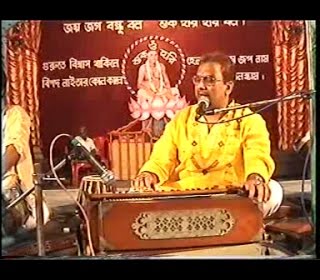 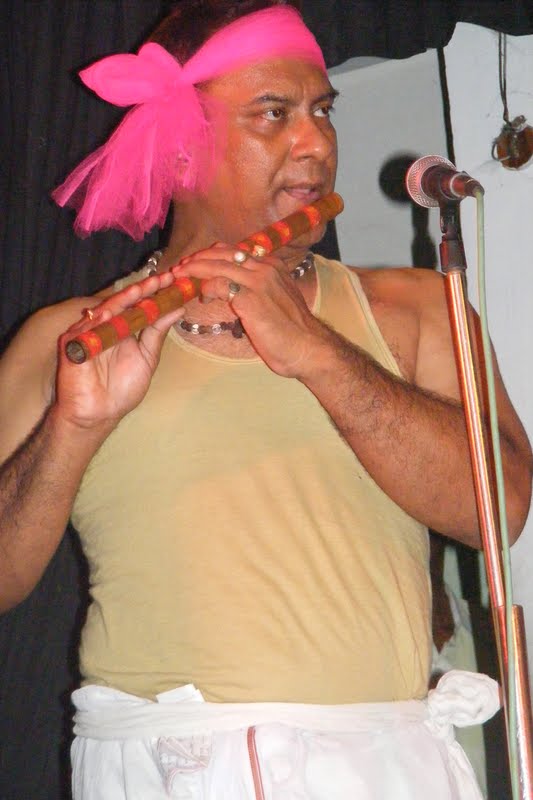 http://www.youtube.com/watch?v=AfGMxxMlJ6I&list=UUcSepBm29qL7C7FPDAeTivA&index=15&feature=plcp  GROUP SONG HARE RE RE AMAY CHERE DE RE RE !!! WONDERFUL SONG BY CHILDREN!!